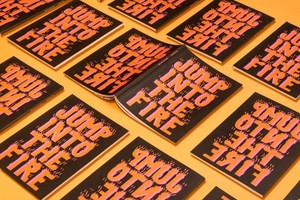 The images in “Jump Into The Fire” were produced between 2008 and 2015 and are a blend of both “posed” and studio images, snapshots from personal vacations and side trips, and outtakes from daily life.

These selections examine the territory between Real and Synthetic; Vernacular and Spectacular. A psychedelic narrative is woven from disparate sources leading the reader from a serene beginning toward a climactic center filled with lush patterns and saturated color. A sinister flash appears briefly then recedes as the book comes full circle to its beginning.

Jump Into The Fire is self-published in an edition of 100 copies.